Taxes are indeed a difficult subject for aam aadmi. It looks like a maze of legalese and maths, signifying nothing much. With the GST, the government is aiming to simplify it for the general public. The government explains the GST in simple terms in the recently-published frequently asked questions.

Here’s what it has to say: GST is one indirect tax for the whole nation, which will make India one unified common market. GST is a single tax on the supply of goods and services, right from the manufacturer to the consumer. Credits of input taxes paid at each stage will be available in the subsequent stage of value addition, which makes GST essentially a tax only on value addition at each stage. The final consumer will thus bear only the GST charged by the last dealer in the supply chain, with set-off benefits at all the previous stages.

In other words, the prices that we pay for goods and services have the taxes embedded in them. Mostly, the consumers are not even aware of or ignore the tax they pay for things they buy.
This is because there is a maze of indirect taxes such as sales tax, excise, and VAT, which leads to increased complexity. The GST seeks to untangle this and subsume all in one single tax, thereby making India an economically unified market.

The Empowered Committee of State Finance Ministers, which deliberated on the tax and its implications, has recommended what all taxes are to be subsumed in the GST:
In the Central taxes: 1) Central Excise Duty; 2) Additional Excise Duties; 3) The Excise Duty levied under the Medicinal and Toiletries Preparation Act Service Tax; 4) Additional Customs Duty, commonly known as Countervailing Duty (CVD); 5) Special Additional Duty of Customs – 4% (SAD); 6) Surcharges, and 7) Cesses.

Among the state taxes and levies: 1) VAT / Sales tax; 2) Entertainment tax (unless it is levied by the local bodies); 3) Luxury tax; 4) Taxes on lottery, betting and gambling; 5) State Cesses and Surcharges in so far as they relate to supply of goods and services; and 6) Entry tax not in lieu of Octroi.
Wait, this explainer is most likely getting all the more complex now.
So check out the table below from PRS Legislative which explains the implications for the common man in simple terms. 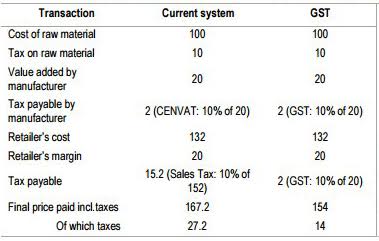 In the example given here the cost of the raw material is Rs 100. The manufacturer and the retailer add Rs 20 value each. The tax rate is assumed to be 10 percent for all taxes.

Under the current tax regime, both excise and sales are a value added tax system. However, there is no set-off for the taxes paid.
So on the Rs 100 raw material, the manufacturer pay Rs 10 as tax. The manufacturer adds Rs 20 value. To this the manufacturer adds Rs 2, which is the CENVAT or Central Value Added Tax. in the example, the CENVAT is assumed at 10 percent of the Rs 20 value added by the manufacturer. So the cost for the retailer is Rs 132, which is Rs 100 (raw material) + Rs 10 (tax on raw material) + Rs 20 (manufacturer value addition) + Rs 2 (tax on the value addition). When the retailer sells it to the consumer, he adds his margin at Rs 20. This takes the price to Rs 152. Add 10 percent sales tax to this, which increases the price by Rs 15.2. Thus the final price the consumer pays will be Rs 167.2. Of this final amount, the taxes the consumer paid is Rs 27.2.

Now look at the GST. Here, as PRS says, there is input tax credit. This means each person pays tax only on the value added by her. So the overall tax for the consumer comes down. In the above example, when the retailer sells the tax is applied only on her margin of Rs 20 and not on the Rs 132 which is the cost she paid to the manufacturer. So the tax the consumer pays much lower at Rs 14 – Rs 10 (the tax paid by a manufacturer when the raw material was bought) + Rs 2 (the tax on the manufacturer’s value addition) + Rs 2 (the tax paid on the margin of the retailer).

In other words, under the current system, there is the cascading effect or double taxation – the consumer pays tax on tax already paid by the manufacturer which is embedded in the prices. That is what makes the consumer higher tax, and in turn, pay higher prices.