Most of the people who need to work online are searching for part-time jobs and are constantly looking out for some extra bucks in a month. Do you know you can earn by playing games? Yes, you heard it right! NFT games option is going to fetch you some dollars for your monthly budget. NFT blockchain is offering video games for an alternative income for gamers or citizens. Due to the recent pandemic, many have lost their jobs and are in search of new jobs. These games would be a ray of hope for such people.

In the year 2017, blockchain technology doomed as many projects based on this developed. Also, the NFTs have emerged and those believed to be popular. To make it accepted, the developers have to build a few games which have become popular these days such as CryptoBlades, Axie Infinity, Alien world, etc. The popularity of these games has attracted people towards NFTs.

Accompanied by blockchain technology, these NFT games are used to validate transactions. Since these games are on a decentralized system, all the players will have shares in the winning amount. These games have their financial system with transactions and the elements in the games can be exchanged for real money.

In the traditional game, people used to put money and play but the returns were null that gave a bad perception of such games. Now after these NFT game’s success, people believe that there are genuine games that return real money. The present most popular NFT game is Axie Infinity. Since this has the ‘Play to earn’ model, more people attracted to it and it has shown around 1.5 million dollars of revenue since 2018.

In the game Axie Infinity, they have developed digital pets names ‘Axies’. Users in this game are allowed to buy, raise or sell these digital pets that are tokenized. For an additional income, people are relying on this game and generate good income. The game is growing rapidly in the industry and is trending.

How can you play on Axie Infinity? 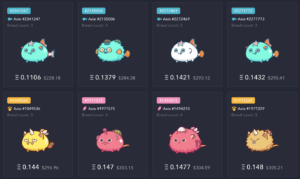 1) You need to do some initial payment which is higher compared to other traditional games. The minimum would come up to $700 or so. This is why they have some schemes for people who cannot afford them. The schemes are like scholarships.

2) You can win cryptocurrencies in the game that you can sell later and earn money out of it. You can even get SLP tokens (Smooth Love Potion) that can be traded in Binance global exchange.

4) The advantage of this game is that not only gamers but also others can play it as it is a simple game.

5) Another advantage is that this does not need a desktop or a laptop but can play with your cell phone.

How can you go with this game in India?

The popularity is of this game is such that all gamers want to have it and even Indians too. There are simple steps for you to play this game in India.

The Axie pet is an oval-shaped creature that you can customize and can train according to your preference. In the Axie Infinity game, these Axis can be used to fight with Monster in the player’s arena. Whatever the player wins in the game can be exchanged for real money. This Axie is nothing but an NFT. You need at least 3 Axies to play the game in Axies Infinity.

There are 9 classes in an Axie team. You can select any of them and each has its strength. The classes are Beast, Mech, Dusk, Bug, Aqua, Reptile, Dawn, Plant, and Bird. Some of them are strong and some or not, just like a Pokemon. These Axies can be customized as per your requirements and the customization parts are called their body parts. You can customize six parts of these Axies like eyes, mouth, ears, back, horns, and tail. You can choose these parts from any specific class. Hence, each Axie is unique.

The Axie strength is determined by their stats. These stats are through their class and body parts which the player chooses.

Stats of the Axie includes the following:

Health means hit points in the game. This point signifies the damage an Axie can take before it is knocked down.

The skill level of an Axie is calculated by how strong it is against the opponent through its combo moves.

The morale level is determined by how many times an Axie can hit the opponent critically. The last chance moves are granted if they are themselves critical.

What is the ability of an Axie?

There are four abilities of an Axie. Each move in the game is displayed by a card. The ability of an Axie purely dependent on the class and body parts the player chooses. Ability in this game meant the attacks and the defends of the Axie. In the game, there are 132 total moves which are also called cards.

Concluding, we can say that this game is an innovative one as it runs on blockchain technology and holds huge potential in the coming future.