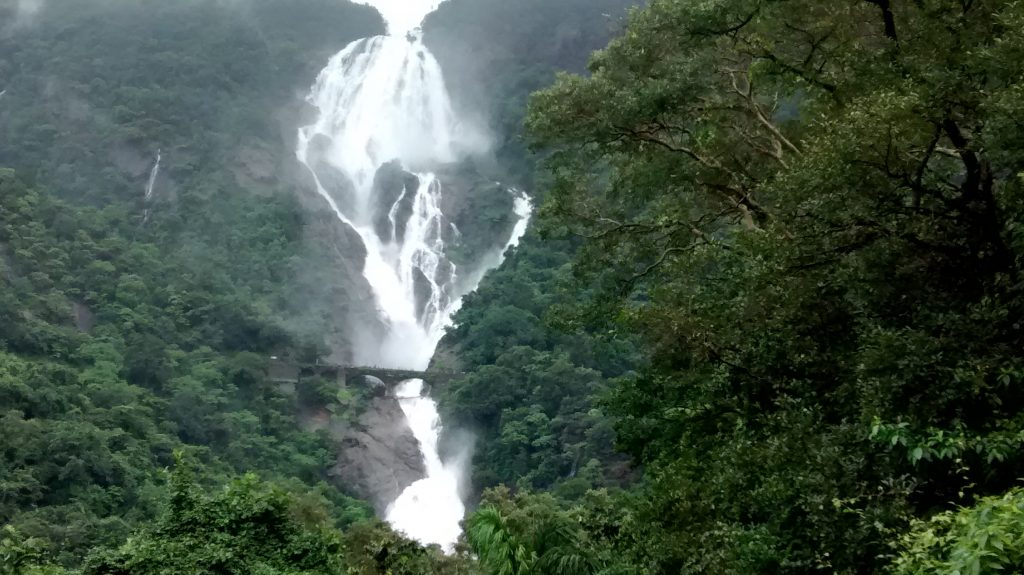 Dudhsagar waterfalls or The Sea of Milk is well known for its spectacular view. Dudhsagar is the fifth highest waterfall in India falling from a height of 1020ft.

The Water Fall can be reached both by road and rail. It can be reached by road from the National Highway (NH-4A). The nearest Station to the falls is Collem (Kuhlem) (South Central Railway). The route for rail to reach the falls from Goa is Collem – Mollem (6 km) – Dudhsagar Falls.
The another route is from Carambolim (Karmali Railway Station – Konkan Railways). The route is Carambolim – Old Goa – Ponda – Tiska- Mollem (total 50 km) – Dudhsagar Falls.

But entering the park and mountains which lead to the falls is not advisable in a regular car, and may only be accessible to SUV’s and 4WD jeeps, as the road comprises a jungle track that has rivers crisis crossing it at several points.
The driver drops one just near the falls from where one may have to walk 1 kilometer ahead, passing over small ways carved through the rocks at the foot of the falls. This waterfall lies on the Londa-Margaon railway route.

Trekking in Dudhsagar is a famous tourist attraction. There are 2 abandoned shelters for the refuge of trekkers (left to the falls and right side beside the railway track) however they are available on the first come first serve basis. Medical and pure drinking water facilities are not available around Dudhsagar but one can approach the station guard at Dudhsagar railway station in an emergency. There are 4 possible routes to reach Dudhsagar Falls, of which only two are accessible in monsoon.

Route 1 (Castle Rock Route)
This is the most famous route during the monsoon, Reach Castle Rock station and start a Scenic 14 km hike to Dudhsagar Waterfalls along the railway track, it normally takes 5–6 hours for a normal person to reach.In this route we will be passing through a number of tunnels, a board reading “Welcome to Goa” and also great views of the Valley.

Route 2 (Kulem Route)
This is equally scenic but less popular as compared to Route 1, One has to get down at Kuhlem/Collem Railway station and walk towards the falls which is about 11 km away. It normally takes 4–5 hours for a normal person to reach. The famous photograph of Trains passing through before the waterfalls can be seen in this route, and also the complete strecth of the falls will be visible while you hike towards the waterfalls.

Route 3 (Transport + Hike)
In Kulhem one can hire a 4X4 to reach the foot of the Dudhsagar waterfalls, There is a taxi stand called ‘Dudhsagar Taxi stand’ where one can hire a vehicle and get dropped near the falls which is 1 km hike from the dropping point. This is used in the post-pre monsoon season and is suitable for large groups with kids and ladies.

Route 4 (Kuveshi-Dudhsagar)
This is the most adventurous route and cannot be attempted in monsoon since we have to cross Mondovi river during the hike. The hike starts from a village called Kuveshi around 10 km from Castle Rock railway station. The hike is through thick jungle and is hard to complete without experience. By this, we can reach Dudhsagar Railway station which is 1 km from the falls.