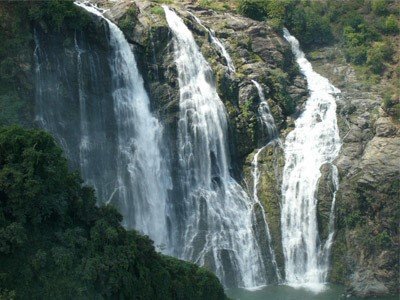 The Kunchikal Falls is the highest waterfalls in India and second highest in Asia. The tallest waterfall in India with a height of 1,493 ft is located near Agumbe in Shimoga district of Karnataka.

Agumbe is among the places in India that receive substantial rainfall, and it has the rain forest research station in India. The India’s biggest waterfall is formed by the Varahi River and lies in the Western Ghats. The Ghats is well famous for its Giant Indian squirrel, Indian bullfrog and other unique birds, rare reptiles and bizarre wild animals.

After construction of Mani Dam near Masthikatte and underground power generation station near Hulikal, Shimoga district, the water flow to this falls is significantly reduced and visible only during the rainy season (July-Sept). As the falls is within restricted area, Gate pass is required to visit, and the pass is being issued at Hosangadi village.

How to reach the Kunchikal Falls

The Kunchikal Falls is a tourist destination and hence, there are transportation facilities available to reach the waterfall.
By Road: There are private buses that operate from Bangalore to Kunchikal Falls. However, such buses are very few in number. There are also just a few buses that operate till Hulikal. As such, it is better to hire private cars to reach the waterfall comfortably. Several private operators offer vehicles to hire for trips to the waterfall.

By Air: The nearest airport is the Mangalore Airport that stands at a distance of 142 km from the waterfall. The airport connects the area to all other major cities of the state and beyond.