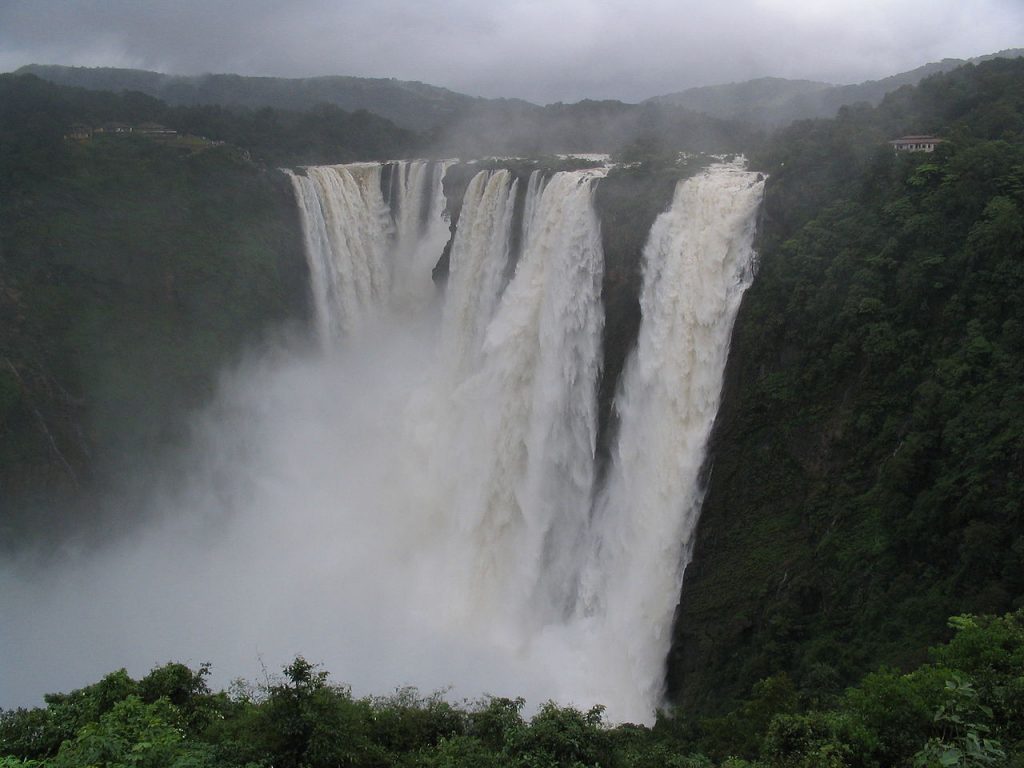 Jog Falls is created by the Sharavathi River dropping 253 m (830 ft), making it the second-highest plunge waterfall in India after the Nohkalikai Falls with a drop of 335 m (1100 ft) in Meghalaya.

Sharavathi, a river which rises at Ambutirtha, next to Nonabur, in the Thirthahalli taluk and takes the northwesterly course by Fatte petta, receives the Haridravati on the right below Pattaguppe and the Yenne Hole on the left above Barangi. On arriving at the frontier it bends to the west, precipitates itself down the Falls of Gersoppa, and passes that village (properly Geru-Sappe), which is some 29 kilometres (18 mi) distant, discharging into the sea at Honnavar in North Kanara.

The Sharavati, flowing over a very rocky bed about 250 yards (230 m) wide, here reaches a tremendous chasm, 290 m (960 ft) deep, and the water comes down in four distinct falls. The Raja Fall pours in one unbroken column sheer to the depth of 830 ft (250 m). Halfway down it is encountered by the Roarer, another fall, which precipitates itself into a vast cup and then rushes violently downwards at an angle of forty-five degrees to meet the Raja. A third fall, the Rocket, shoots downwards in a series of jets; while the fourth, the Rani, moves quietly over the mountain side in a sheet of foam. The Tourism Department has built steps from the viewpoint to the bottom of the hill where the waterfall can be seen at the opposite side. There are approximately 1400 steps built to reach the bottom of the hill.

Nearest railway station (distance to the location):
Talaguppa and Sagara (SRF): For Sagar 30 km
Honnavar(68km) which is in Mangalore-Mumbai Konkan Railway route.
Nearest bus station: Sagara and then Jogfalls busstop.